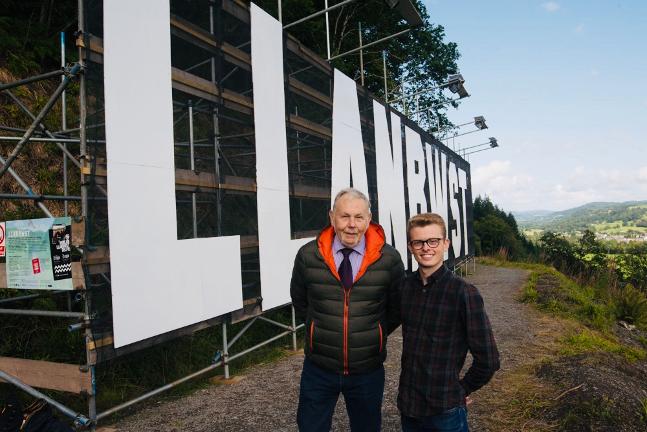 The giant LLANRWST sign overlooking the Conwy Valley will be removed on November 11th, so there’s a some time to visit before it comes down.

It has been seen over a million times since being installed in July in time for the National Eisteddfod of Wales in the town, and hundreds of people on social media want to have a permanent sign on the hill. There have been numerous visits to the sign from locals and visitors, many who had never previously been to the location in Gwydir Forest.

Iwan Glyn Williams, who was part of the team who organised installing the sign said “It's been great to see it on the hill since July, and I’ve lost count of the number of positive comments about it. We could not have done it without the support of Golygfa Gwydir, Natural Resource Wales, Llanrwst Town Council, Davies Scaffold, CL Jones and Llanrwst’s County Councillors Cllr Aaron Wynne and Cllr Ian Jenkins.”

Cllr Aaron Wynne said “The sign has been fantastic for Llanrwst and the whole area and I absolutely agree that it would be great to keep the sign in place, although I’m aware that this version was designed as a temporary structure so we’ll be discussing with Natural Resource Wales and the National Park to see what's possible in the future.

“Thousands of people - local and from afar - have visited the sign, and it’s been the focal point of many discussions in the Conwy Valley this summer. Locals have adopted the sign and asked for it to stay. We’d need to rebuild it with more robust materials, get the relevant permissions and find the resources to make it reality. I believe if we work together then we can make this happen.”

Don’t miss your last chance to see the sign before it’s deinstalled on Monday November 11th.