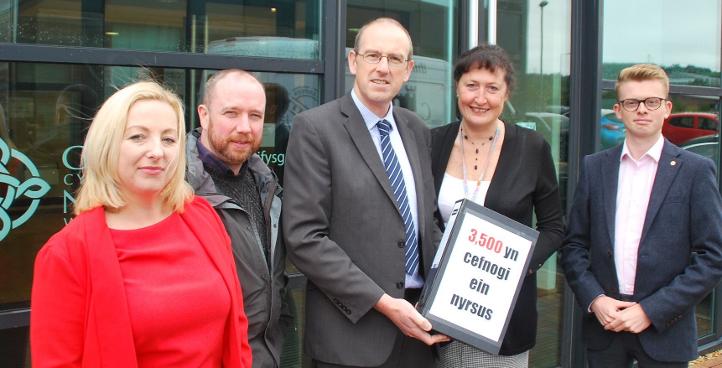 A 3,500-name petition opposing plans to change nurses rotas in north Wales has been handed in to Betsi Cadwaladr health board by Plaid Cymru.

Plaid Cymru’s North Wales AM Llyr Gruffydd led a delegation of councillors from Wrexham, Denbighshire and Conwy to present the petition to the health board secretary Dawn Sharp.

"Over the past two months, the health board has been consulting about changes to the rotas of 4,095 nurses and health care support workers across the North. The changes effectively mean that frontline staff would see their shifts extended by an additional half-hour break for no extra pay, which will have an impact on nurses’ work-life balance and childcare arrangements.

“Many of them have contacted us to say how they already work through their breaks because of staff shortages and the desire to care for patients. This goodwill is being abused and frankly frontline staff are now at breaking point. Over the course of this campaign, we’ve pointed out that there are one in ten nursing posts in Betsi standing vacant and this has meant huge additional agency nursing staff costs for the board. The anticipated savings from these changes is £25,000 a month – just 2% of the agency nursing costs. At the same time, it will undermine all goodwill that nurses have shown in going the extra mile. It’s a terrible proposal and one I hope the board is big enough to realise is a mistake."

“As well as the Plaid Cymru petition, a further 3,500 people have signed Unite the Union’s petition on the same theme. This is clearly an issue that concerns thousands of people across the region who understand the fantastic work being carried out by our nurses and do not want them to be stretched even further by these proposed changes. The board must scrap this proposal before it further undermines nursing morale and leads to more leaving the profession.”

The board had accepted the petition and it would be presented at the next board meeting on November 7th.